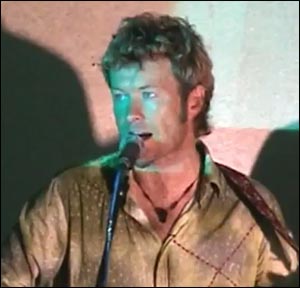 In the wake of the tsunami catastrophe in Southeast Asia in December 2004, the Norwegian Red Cross and other organizations put together a live telethon charity concert to raise funds to support recovery efforts in the affected areas.

Morten Abel, Sondre Lerche, Sissel, Arve Tellefsen, Petter Stordalen, Janne Formoe, Venke Knutson and Magne Furuholmen are just some of the celebrities who in one way or another participated in the campaign, which was named “En ny hverdag” (“A new life”).

At the concert, Magne performed “Little Angels” from his album “Past Perfect Future Tense”. He also donated one edition of 12 graphic works to be auctioned during the telethon. The concert took place at Stratos in Oslo, Norway.

Note: I couldn’t find an actual photo from this event, so I am using a screen shot from a different performance of “Little Angels”, at Notting Hill Arts Club in September 2004.