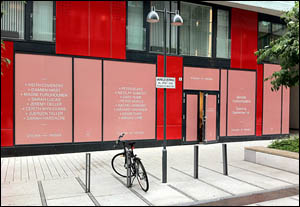 On June 22, there was an article in Vikebladet.no announcing that Magne will open an art gallery in Oslo together with Hugo Opdal and Paul Stolper on September 1, with an exhibition of his new works, ‘Futura Plus’. Here is the Google translation of the article:

Magne Furuholmen, Hugo Opdal and Paul Stolper has several years of informal collaboration decided to start the gallery together in Oslo, focusing on artists from Norway and the UK.

The gallery is named ‘Stolper + Friends’. It is housed in an exciting new gallery area on Tjuvholmen. The gallery opens 1 September with the exhibition ‘Futura Plus’ with new work by Magne Furuholmen.

As the image the artist has Furuholmen for several years been affiliated with Paul Stolper Gallery in London. He has also exhibited several times at the Art Gallery Studio Hugo Opdal on Flø.

The trio have previously collaborated on the art festival ‘Go With the Flo, which among other Furuholmen its multi-disciplinary project Apparatjik participated last year.

Tjuvholmen is located just next to Aker Brygge, right on the water. Branded as ‘Oslo’s newest neighborhood’, there are apartment buildings, shops, galleries, restaurants and more under development. It is separated from Aker Brygge by a narrow canal and footbridge. [Local map]

A newsletter on July 18 from magnef.org, gave us the new gallery location and a picture from the outside (see above).

Paul Stolper is pleased to announce the launch of a new gallery, STOLPER + FRIENDS, opening on September 1st, 2011 in Oslo, Norway. Opened in partnership with long-time collaborators Magne Furuholmen and Hugo Opdal, the gallery is located in the newly thriving arts district of Tjuvholmen near the city center of Oslo. Historically a dockland and on the sea front Tjuvholmen has been newly revived from its industrial past. STOLPER + FRIENDS is one of a few galleries that is spearheading its cultural development. Notably, the acclaimed Astrup-Fearnley Museum of Modern Art is relocating to Tjuvholmen into a stunning new building designed by Renzo Piano, due to open in 2012.

STOLPER + FRIENDS will open September 1st, 2011 with a schedule of both Norwegian and international exhibitions. The debut exhibition is ‘Futura Plus’, featuring works by Magne Furuholmen. Having exhibited for many years with Paul Stolper Gallery in London and at Studio Hugo Opdal in Flø, Norway, it is only fitting that Furuholmen should launch STOLPER + FRIENDS in Oslo with an exhibition of his latest paintings and sculptures. STOLPER + FRIENDS proudly stands as a concrete manifestation of years of creative collaboration.

On August 4, Magne sent out a newsletter announcing the cancellation of his exhibition ‘Futura Plus’:

In light of the recent tragic events in Norway, Magne Furuholmen has decided to cancel his upcoming exhibition ‘Futura Plus’ due to the potentially upsetting nature of the works.

The new gallery ‘Stolper + friends’ will launch as planned on the 1st of September, but the first exhibition will be ‘The Souls’ by Damien Hirst.

On August 6, VG published an interview with Magne about the reason behind the cancellation. You can read translated excerpts from the article on a-ha-live.com (if you are reading this after September 1, the text will likely be found in the archive at this URL: News Archive August 2011).

On November 6, 2012, Aftenposten published an article about the gallery closure at the end of the year, when the two-year lease was up. 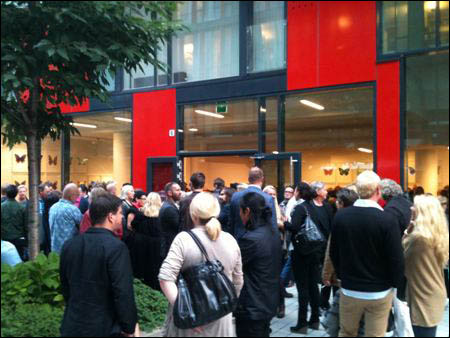