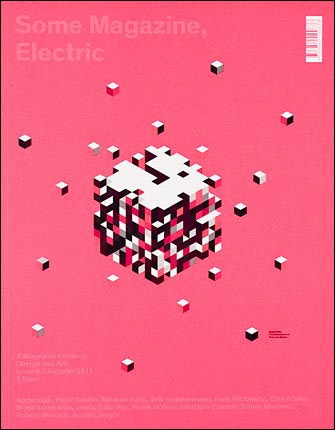 The second issue of Some Magazine features a number of artists from around the world, a Q&A with Apparatjik and an overview of the Electric workshop which took place in May 2011 in Halle, Germany. The magazine cover is a design by Ed Allen of Aspire Design Studios in London.

An Excerpt from the Apparatjik Q&A:

You are combat disco musicians. Do you fight with an electric pride?

The eyeon committee distributes its orders without always declaring its intentions, so the mission objective here is not clear:
whether we are here to combat disco, or to disco up the combat situation. Either way, it must be taken very seriously. All our weaponry is electricity based – as is all organic substance.

An excerpt from the workshop overview:

It’s indeed a special concoction that the Some Magazine editorial staff has come up with, together with smart automobile maker. Two musicians from the band Apparatjik, twelve design students of the University of Art and Design Halle, and a big box with the individual parts of a smart fortwo electric drive. smart meets art and car parts are transformed into light-space modulators.

Some Magazine had a release ceremony at HBC Berlin on September 14, 2011 in connection with the Max Dax event series “The future of print”. Among those present were Magne Furuholmen, Eike, Michael Saup and 250 other guests.

Photos from SOME Magazine – Electric launch in November 2011: Some Magazine Facebook

Video from the magazine launch party on September 14, 2011: