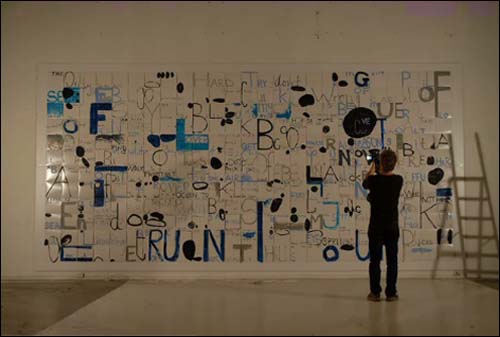 Magne’s second solo album was first offered as a limited edition of 300, the covers hand painted as part of a large canvas and dismantled into its parts – all of which was streamed on the web. On January 16, 2008, Magne announced via a blog on MySpace:

i have chosen to make this record as a kind of limited ‘collector’s edition’ only: what you buy is a 10-inch high quality vinyl picture-disc, containing six songs recorded in the south of france in june & september 2007

each album cover is a hand-painted original – all of them parts of a larger work;
the 300 covers are mounted together and painted as a single work during a painting performance to take place in the beautific bell tower at oslo city hall, commencing the 23 of jan 2008.
watch me progress/digress on www.magne-f.net/magneftube…

note that this is a closed event and can only be viewed online, so no need to badger the nice people at the city hall.

afterwards the painting will be carefully dismantled into its 300 parts,
and each cover numbered and signed by…wait for it; meg, me, moi, mich.

The album sold out very quickly, even before the painting performance took place.

On January 23, when everyone expected to watch Magne paint the album covers, there were some technical difficulties with the web stream. When it was finally fixed, those who were patient enough to wait for the stream were rewarded with hours of footage of Magne painting in a sort of stop-motion format; there were still images showing for several seconds, then skipping to the next image, which took place 30 seconds later. However Magne revealed in a blog that the recording was already completed by the morning of January 23 when the broadcast had been scheduled to began.

Note: MySpace removed all blogs when changing their platform a while back, so unfortunately the links no longer work. Please see the Blogs page for more info and a transcript of all the blogs in downloadable format.

This is the ‘documentary’ video Magne included with the limited edition album/CD:

Several fans took screen shots from the performance and created videos of the event, here is one example: