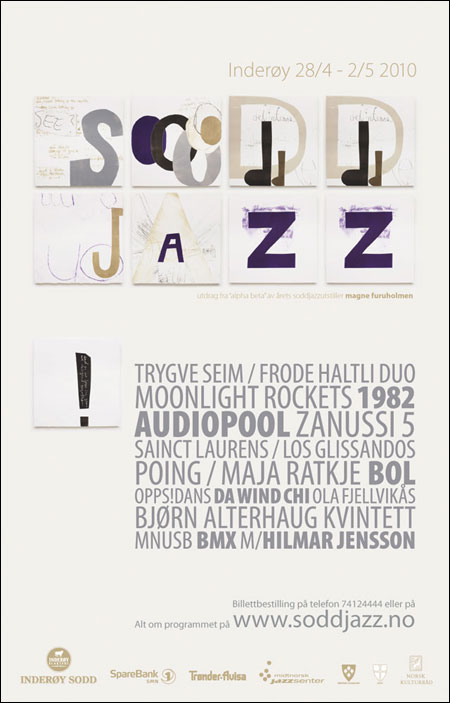 Magne opened an exhibition of works from ‘Alpha Beta’ at Nils Aas Kunstverksted on the same day that SoddJazz 2010 opened with a concert by the Trygve Seim/Frode Haltli duo. Here is the announcement (with Google translation below) in a newsletter from magnef.org on April 23, 2010: 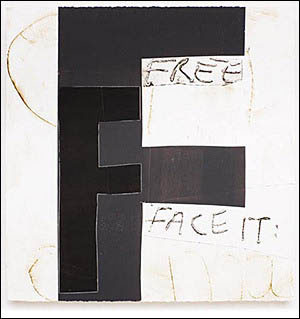 [Translation: Magne Furuholmen has worked on the visual arts for over 20 years. Text and letters have always been central to an evocative element in his work. In the series, alpha – beta, this comes to a logical conclusion when he deals with each letter of the alphabet. We show 44 prints and four larger paintings.

Last week, a-ha ended their concert tour in Brazil. May 6 is the first of 3 concerts in New York. Before all that, Magne Furuholmen is going to spice up the Soddjazz festival with his graphic print series called “alpha beta”.

Manger Henning Lysrad, at the Nils Aas Art workshop, said “We’re looking forward to it! Magne Furuholmen is a famous and very versatile and well-rounded artist and sculptor within many different techniques and materials. He has had many exhibits and public decoration projects. He is coming to Soddjazz and the Nils Aas Art Museum with his “alpha beta”. It is comprised of 30 graphic pictures made in 2009–one for every letter in the Norwegian alphabet.”

Eirik Hegdal, one of the initiators of Soddjazz and one of Norway’s most famous jazz musicians said, “It’s fun that Magne Furuholmen was chosen to be this year’s Soddjazz artist. Maybe we can get him here for the opening on April 28. Even if my life was influenced early on by jazz, I had pictures of a-ha in my room. I was 12 years old when “Take on Me” was released. I liked a-ha!”

For Magne Furuholmen, being an artist is an important part of everyday life. And when a-ha packs up for good after the 3 sold out concerts at Oslo Spektrum at the beginning of December, he will have new challenges. During this last tour, Magne said “It’s interesting to see the world through a-ha glasses for the last time. We are retiring as a band, not as individuals. Change is always hard and it’s east to remain stuck in old tracks. It’s time to move on.”

What he likes best with being an artist is to see something being made or becoming something. He describes each new artwork as like being present at a birth–emotionally tiring, but rewarding. Mags, as he is called, says “The freedom to define each day as your own is important. The challenge of the feeling to start over each day excites me.”

Olav Kallhovd, one of the founders of Soddjazz in 1995, said “It’s extra fun that Magne Furuholmen was chosen as the festival art exhibiter. Coincidentally, I got a strong relationship to his art a few years ago. I bought an artbook with a series of Furuholmen’s graphic prints. The book was in my living room for many years.”