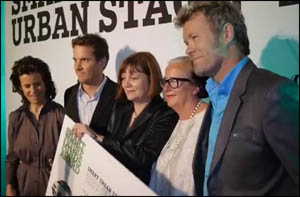 Magne was one of the judges in the smart urban stage competition to choose the international smart future minds award winner. The projects were based on the theme ‘The future of the city’, and the winning concept was ‘The People’s Supermarket’ by Kate Bull and Arthur Potts from London.

More info from The world of Mercedes-Benz AMG blog:

Between April 2010 and September 2011 a smart urban stage was held in eleven European cities (Berlin, Rome, Zurich, Paris, Madrid, Brussels, Amsterdam, London, Barcelona, Cologne and Milan) and a total of 110 future-oriented projects on the theme of “The future of the city” were presented. 55 experts from the fields of society, design, architecture, media, science and mobility – including Italian industrial designer Martino Gamper, French journalist Diane Pernet, and Spanish film director Isabel Coixet – acted as curators for the sustainable, future-oriented ideas, and also chose the local winners of the smart future minds award.

The national winners did not only win prize money of €10,000, they were also nominated for the international future minds award that has now been awarded in Frankfurt to the food co-operative “The People’s Supermarket”.

All eleven projects shown at the smart urban stage proved themselves to be particularly trend-setting and sustainable in the Europe-wide competition. They provide answers to the question of how people living in urban areas can bring more community and sustainability into their everyday lives in future.