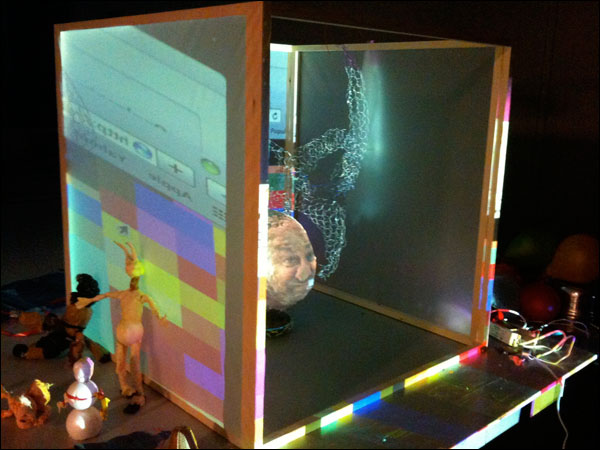 Over two days in January, Magne Furuholmen and Ute Meta Bauer facilitated a workshop focused on the concept of puppets. Participants created a variety of works utilizing the materials at hand; engaged in some creative exercises as teams and individuals; and generated short video clips and a sort of puppet show using shadow techniques and video projection.

On January 19, 20 and 21, 2010 – a workshop titled Pupparatjik took place at KIT, (Kunstakademiet i Trondheim) The Faculty of Fine Arts, NTNU in Trondheim, Norway.

Ute Meta Bauer and Magne Furuholmen were invited by Professor Regina Möller to give lectures and host the workshop.

More from the KIT invitation to participate:

In this two-day workshop Ute Meta Bauer and Magne Furuholmen will create with the workshop participants a kind of puppet show interacting with shadow techniques and video projection.

Puppets are no innocent toys – they are figures animated and manipulated by the puppeteers. Puppets represent societal life in almost all cultures, and puppet plays with hand puppets, rod puppets, puppets on strings are to be found around the globe. The use of puppets in art works often deal with allegorical and symbolic meanings in order to play with the theatre of realities. One might just think of DADA, Surrealism or the famous Bauhaus Theatre, for example the stage plays by Oskar Schlemmer or the hand puppets created by Paul Klee.

Furthermore the workshop reflects upon scale & collage and puppets & video projections – both address the question of re-presentation.

A workshop participant named Gregor joined the Apparatchick Forum after the workshop ended and shared his experience in good detail. A couple of quotes from Gregor:

[…] We started out by Magne talking a bit about apparatjik, and showing some videos and stuff that was on the site. There was a mess of information, about what we were supposed to do, and that we were supposed to do whatever. It wasn’t really easy to understand what was actually the case. But some groups were set up, and people joined the one with what they wanted to work on.

So we were let loose, and everyone started being super creative, and just doing whatever fell into their head, with Magne and Ute, and Regina (teacher at the academy) running around trying to give some directions in what they wanted, etc.

And the results you can see a lot of on the pupparatjik-page.

Following this introduction, Gregor welcomed people to ask him questions about the workshop, and the rest of the discussion was quite interesting. Gregor described Magne and Ute’s different styles in facilitating the workshop:

Magne and Ute was a like two poles on a magnet. There will always be two poles, so you will always need them both, but the behave a bit differently. Magne was, at leas what I felt a lot about running around and show what could be done with something he saw we did. And showing other peoples stuff on the net. But Ute was more absorbing. Asking more about what we did.

At least that is how I felt. They worked well together.

Face it! It IS funny… from Apparatjik on Vimeo.