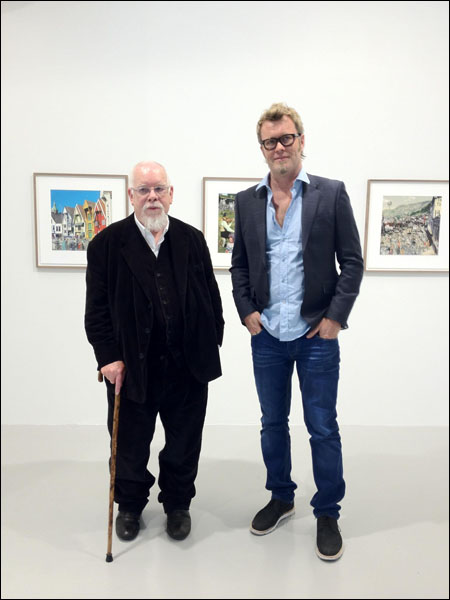 Sir Peter Blake, known to many as the father of British Pop Art, created a new series of prints, entitled ‘The Oslo Suite’, inspired by his experience of the Norwegian City. ‘The Oslo Suite’ opened at Stolper + Friends on June 7, 2012 and ran through July 1.

‘The Oslo Suite’ was Blake’s first solo exhibition in Norway, where he showed ten new, custom-made works inspired by Norwegian landmarks and iconic Norwegians. Among them are Fridtjof Nansen, Roald Amundsen, Sonia Henie, Edvard Munch – and a-ha. The Norwegian flag is also incorporated in one of his designs.

“Blake is the greatest living pop art artist, with an incredible track record,” Magne told Aftenposten. “He has included a-ha in a series of historic – or iconic – Norwegians. This is part of his found-art series and his focus on fame and historical importance,” Magne says. “It is an amazing thing to be included in his oevre.”

The a-ha photo chosen for the exhibition was taken by Norwegian photographer Janne Møller-Hansen, who traveled with a-ha during their first world tour in 1986-1987. Many of you will remember that Janne had a photo exhibition in Oslo in December 2010, coinciding with a-ha’s final concerts.

In addition to the exhibition at Stolper + Friends, Blake’s works are represented in the Oslo Suite at THE THIEF hotel. There is a video clip in this article of hotel owner Petter Stordalen being interviewed in the suite by TV2, which shows some of Blake’s works as he moves through the room.

In connection with the exhibition and Sir Peter Blake’s works represented in the Oslo Suite at THE THIEF, Kunst Magazine published an article in April 2012. Thanks to Tiffany Dahlgren for these translated excerpts related to Magne’s involvement with the projects:

“Behind him (Peter Blake) stands one of the gallery owners, Magne Furuholmen, and listens. He listens to the journalists who are asking, digging, admiring, filming and congratulating.”

Photo caption of Magne inside the gallery (seen through the window) sitting down with Peter Blake and others:

Peter Blake says he has done similar projects/exhibits in Paris, London and Venice. Norway was the next natural step to take.
“And besides, Magne Furuholmen invited me.”

Magne and Peter Blake soon went outside the gallery, after Kunst magazine arrived, for photos/interviews because Peter Blake is 80 years old and needed elbow room and fresh air.

Long photo caption of Magne and Peter Blake standing together:

In September 2011, Magne Furuholmen, Hugo Opdal, and Paul Stolper opened the gallery “Stolper + Friends” at Tjuvholmen with Damien Hirst on the program.

Magne–“I invited Peter Blake to the gallery because he is perhaps the world’s greatest living representative of pop art. His interest in pop culture lets his works continually absorb the time he lives in. It’s great that he said yes to come here, and was inspired to make a small exhibit here in Norway with totally new works. We are very proud of this, especially in this year when he turns 80 and is so strongly sought after all over the world.”

Kunst Magazine–“Is it true you have a personal relationship to Blake?”

Magne–“Yes, Peter and I met for the first time in London in 2004, through a mutual friend and gallery owner, Paul Stolper. We both had a tour together through his fantastic studio. Since then, a criss-crossing network within music and art have made us get along well, and we have kept in touch ever since. In 2008, I was asked by “TIME OUT” magazine to write an article about my favorite Londoner. I chose Blake because he has an inborn openness and curiosity that is unique at his age, when interest and playfulness often disappears. It’s really exciting to see a person with his history have such an insatiable appetite and genuine interest for pop culture.”

Kunst Magazine–“Last year, you exhibited Damien Hirst, and now Peter Blake. Can you reveal who the next big artist will be?”

Magne–“No” with a smile, to end the interview.