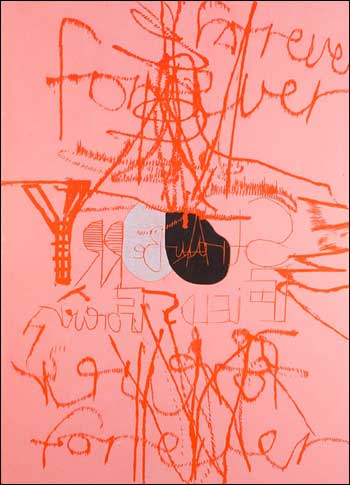 ‘Norwegian Wood’ is an exhibition of ten new woodcut prints in large format, which will be presented by Paul Stolper in London from May 3 – June 1, 2013. The press release is available for download here, and the works can be seen here.

From the press release:

Paul Stolper Gallery is proud to present ‘Norwegian Wood’ an exhibition of ten new woodcut prints in large format by Norwegian artist Magne F. Since 2004, the artist has primarily explored self-written texts, letters and lyrics across various mediums in his work. This new series ‘Norwegian Wood’ uses music as its main reference point, but this time it is the iconic pop music of the Beatles, music which Furuholmen grew up listening to, and which directly inspired him to leave his native country to become an internationally renowned musician at a young age. Borrowing titles of songs and lyrics, the artist creates new works by transforming and changing these well-known word combinations into a new visual language.

On August 23, a-ha.com announced that ‘Norwegian Wood’ will be presented at Stolper + Friends in Oslo from September 14, 2013, with the opening taking place at 2:00pm.

This video was embedded in this NRK article about Magne’s exhibition, published on May 2, 2013: