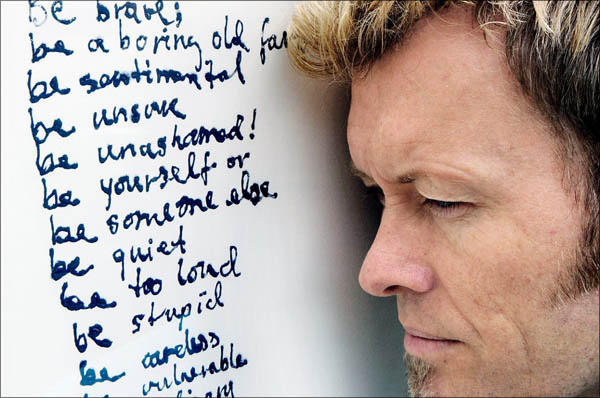 Magne brings works derived from ‘Norwegian Wood’ to Kunstgalleriet in Stavanger for an exhibition opening on January 25. The exhibition was announced on December 18, 2013 via an article in Rogalands, however the article now appears to be offline. Fan site a-ha Live provided some excerpts from the article, though:

Kunstgalleriet in Stavanger recently announced that Magne will hold a Beatles-themed solo exhibition at the gallery next month.

“We are very proud that Magne Furuholmen is bringing a new solo exhibition to our gallery”, Elin Halvorsen at Kunstgalleriet told newspaper Rogalands Avis on December 18th.

“In London [and Oslo] he exhibited woodcuts, but this time he’s made twelve large oil paintings. The exhibition itself doesn’t have a title, but the theme of the exhibition is Norwegian Wood Remix“, Halvorsen said.

In connection with the exhibition opening, Magne did an interview on January 24 with NRK Radio in Rogaland. Listen here: Lokalen: Ettermiddagssending fra NRK Rogaland (see below for a translation).

Interview on NRK Radio in Rogaland
Translation by Tiffany Dahlgren

(The Beatles song,”Let it Be” opens the interview…)

Program host: “There’s a song many of us know—the Beatles “Let it Be”, a song that fits perfectly for the Norwegian musician/composer we will hear from now. He is probably best known for his band, a-ha, that has sold over 40 million albums. But what does this guy really have to do with the Beatles? And why is he at an art gallery in Stavanger? Lisa (Interviewer) took a trip to a special art exhibit.”

Interviewer: “Yes Mari, I’m standing here next to a real live first knight of St. Olav’s Order, who has made a great contribution to culture, but right now he is standing here and admiring a wall of oil paintings. He isn’t only known for music. I’m talking about Magne Furuholmen. Hi!”

Interviewer: “And you’re not doing it today, either.”

Interviewer: “You’re standing here and looking at a wall of paintings, and this is actually *your* work…?”

MF: “That’s right. It’s been a long time since I was last here in Stavanger with visual artwork, but it was actually here it all started.”

MF: “All the way back to 1989, that was my first exhibit and it was at the Solberga Gallery. It’s nice to be back again.”

Interviewer: I’ll try to describe a little bit. Here there are pictures, oil paintings with letters, etc among other things. *You* will have to tell about this yourself.”

MF: “Well, oil paintings encompass so much, and can be misunderstood. But these are unique works having to do with titles from Beatles songs.”

Interviewer: “And that’s interesting because there are different colors, with letters all over the place….how did you get *this* to be Beatles
song titles?”

MF: “Well, that’s up to the viewer to decide. But on the side, I do so many other things, even a little music, and I can’t help it that
these 2 things (art and music) braid into each other. I’m also working on the music to the film called “Beatles” from the Lars Saabye
Christensen novel and suddenly I was in a Beatles universe!”

Interviewer: And your relationship to the Beatles? It must be more…Elin Halvorsen (gallery owner) is standing here by an oil painting and are
*you* able to find a Beatles song title?”

Interviewer: “Why are you working along with Magne Furuholmen here in the art gallery?”

Interviewer: “Magne Furuholmen, you have to help us find where the Beatles texts are in this painting, with the light blue color and the big
letter “G”…”

MF: “If you’re a hardcore Beatles fan, you can probably guess that it says “a dovetail joint” very easily read in this picture. It’s from the Beatles song “Glass Onion”, a Lennon song.”

Interviewer: “You said you’re making music to the “Beatles” movie based on the Lars Saabye Christensen novel, you’ve been inspired by it in this artwork series, so what is your relationship to the Beatles?”

MF: “They were the greatest when I grew up, and they were the inspiration for Paul and me when we started writing songs. Without the Beatles,
no a-ha. And now, I’m composing music around something I listened to when I was young, so it’s like a journey through time. And for me, it ends with
that I’ll be going to the Abbey Road Studios in March to record my music with their old equipment.”

Interviewer: “It might be stretching it a little bit too far, but then you can say you have *almost* played music with them!”

MF: “Yeah, I’ve sneaked up on stage with Paul McCartney.”

Interviewer: “With “Let it Be” at the Nobel concert?”

MF: “Well no….well, I guess you *could* say you played with the Beatles for a few seconds if you really wanted to kid yourself, but no…but yes it was fun.”

Interviewer: “Have a great exhibit opening!”

MF: “The opening is tomorrow, yes thank you!”

Program host: “Ah, Magne Furuholmen…yes, his exhibit will be open at the gallery until February 26th. And he isn’t only known for his music with a-ha, he has also made solo music …

Here is Magne Furuholmen with his song “Kryptonite””…

(song ends)
That was Magne Furuholmen, who is having a special art exhibit at the art gallery in Stavanger… “