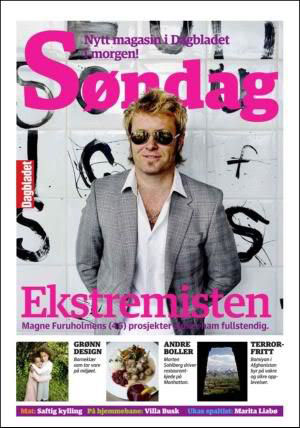 Dagbladet interviewed Magne at BØLGEN & MOI restaurant in Tjuvholmen, where they discussed a-ha’s ninth studio album, art, Magne’s health and more. At the time of the interview, Magne had recently finished desgining various interior elements for the cafe, including the ‘Confusion’ installation.

Translation of the interview by Heidi: West of the Moon Forum

“I recharge by transitioning from one universe to another. I get really frustrated by getting stuck in the same place and I am generally inpatient about myself as well as about other people. Whenever I’m too settled I get disillusioned. That’s when I have to demolish the sand castle that I built and start all over again.”

He talks a lot with his sons about the concept of fame and about how it seems that people nowadays seek fame just for the sake of it. He himself never invites photographers into his home. Not just because he thinks that his home is very uninteresting, he also thinks that knowing that much about another person is not healthy. Nevertheless he has gotten a small grasp of the newest reality concepts though he barely can stand watching the Travel Channel.

He’s unsure on how long he’ll keep on working on the a-ha projects. No matter what he always look at every of their projects as if it was the last thing they’d ever do.