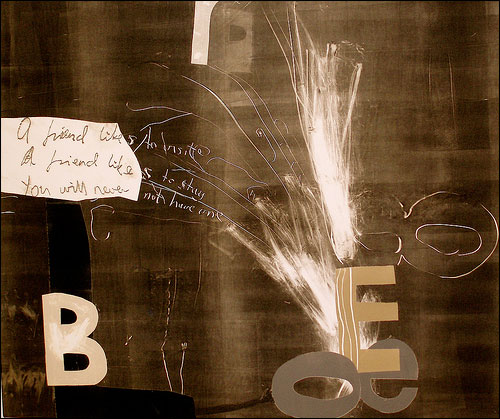 A continuation of his earlier work, ‘Monologues’ included prints, paintings, music and poetry. The exhibition took place in both London and Asker, Norway. “…I’m just trying to teach myself to read and write,” Magne says.

The exhibition catalogue is available to purchase from Paul Stolper.

From the exhibition press release on Norway.org.uk:

His signature is to be found across a wide range of media. As a visual artist however, he is particularly interested in working with various printmaking processes. He enjoys the commitment inherent in the decision-making that occurs in the printing process: “Whatever is sent through the printing-press is irreversible. After the artist has made the decision to print, there is no possible retreat.” Nevertheless, it would be wrong to consider him a printmaker in the traditional sense. A closer look at Furuholmen’s production leaves the viewer in no doubt of the systematic way in which he explores a wide variety of printing methods, often pushing boundaries and making use of the untried potential of a chosen technique, be it etching, monotypes or woodcuts. He often chooses unexpected strategies in order to achieve a particular result, best suited to the artistic concept he is working with.