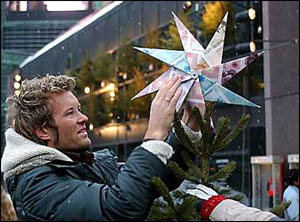 Various Norwegian artists participated in a project to decorate a Christmas tree for each day in December leading up to Christmas Eve, in a public space outside Oslo Sentralbanestasjon – Oslo’s main railway station. Magne had the honor of decorating the first tree, on December 1, and used his commission fee to create the decorations.

He made stars from banknotes and fastened coins in strings, and hung those on the tree. The banknote-stars and the coins were shimmering in the sun and looked quite beautiful as the tree was installed. “It shows a new quality that we don’t usually associate with money,” Mags says. “It can have an esthetic beauty.”

As could be predicted, the money decorations were stolen from the tree. Magne was undisturbed by this, saying that whoever stole the money ‘completed the project’. Perhaps less predictable was the attention of media; there were articles in news outlets across the globe about the project and the money theft. A selection of coverage is below.

Article by Rom for Kunst

Fan discussion: West of the Moon