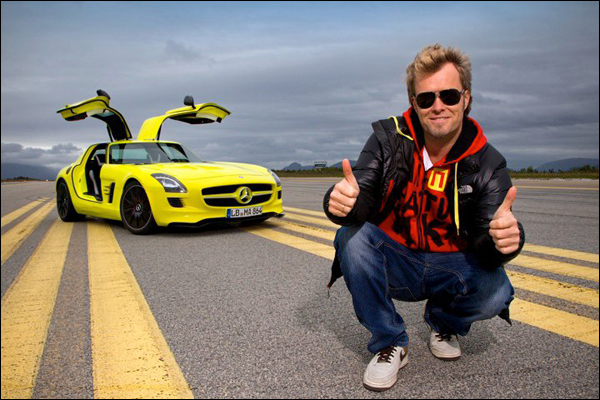 Magne had the opportunity to test drive the Mercedes SLS AMG E-CELL electric car, with 533 horsepower, at Kristiansund airport. Over 20 years ago, Magne and Morten brought the first electric car to Norway, and actively championed the use of environmentally responsible cars. Technology has evolved greatly, and Magne was extremely impressed with the Mercedes he drove in June 2010.

The car is absolutely sick. It is wonderful to sit in a car with the kind of power, with no engine noise. It is a peculiar sensation. (via Google translate)

Tidens Krav published an article and a video from Magne’s test drive. Mercedes-Benz also blogged about it, also sharing photos on their Facebook page:

The innovative SLS AMG E-CELL was officially introduced to a few, select journalists at an event organized in Norway. Magne Furuholmen, the keyboard player of the A-Ha band, was among the guests and lucky to get behind the wheel of the electrically-powered Gullwing and go for a spin. See more photos, taken from the official Facebook page of Mercedes-Benz, after the jump!