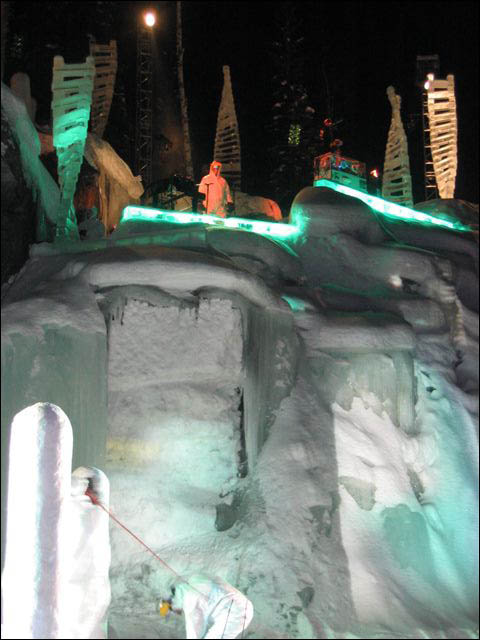 In late November 2003, Ballade.no published an article about Nils Petter Molvaer that may have been the first mention of his live collaboration with Magne, taking place at the Winter Arts Festival in Lillehammer in February 2004:

He is also collaborating with Magne Furuholmen (A-ha band member) for the Vinternatt festival in February 2004.
How are you and Furuholmen co-operating on this project?
“We are mixing what I am doing and what he is doing – he has lot of great stuff, and we put it together, trying to find interesting contrasts”.

On December 5, information about tickets was announced on a-ha.com, and fans were very curious to know what kind of music Magne would be performing. At this point, there had been mention of a possible solo album coming from Magne in 2004, but no solo performances apart from him singing ‘Dragonfly’ at the HitAwards (September 2001) and during the Lifelines Tour (September 2002).

Magne, trumpet player Nils Petter Molvaer, Raymond C. Pellicier (a.k.a. DJ Dark Norse) and the ice-sculpting group “Minus” performed twice on February 13, 2004 as part of the Lillehammer WinterArts Festival. A report and photos from the event can be found on a-ha.com, as well as a detailed fan review from the concert.

The music shifted to a powerful industrial groove accompanied by incredible surround sounds of chain-saws, cleverly used both rhythmically and as harmony. This type of shift really characterized the concert; tender songs by Magne and Nils Petter together with challenging rhythms, blending Magne’s sensitive songs and Nils Petters techno-jazz into a highly experimental tag-team form of music. This was the first time an audience could witness Magne singing material for his forthcoming solo-record, and the local newspaper noted somewhat surprised that whilst Magne’s voice had never really been featured in a-ha, he emerges as a distinctive and “more than able” vocalist. (a-ha.com)

Around Easter of 2004, NRK 2 showed a 47-minute special about the performances, including interviews and behind the scenes footage, as well as much of the concert itself. You can now watch this TV special in its entirety on Nils Petter Molvaer’s official site.