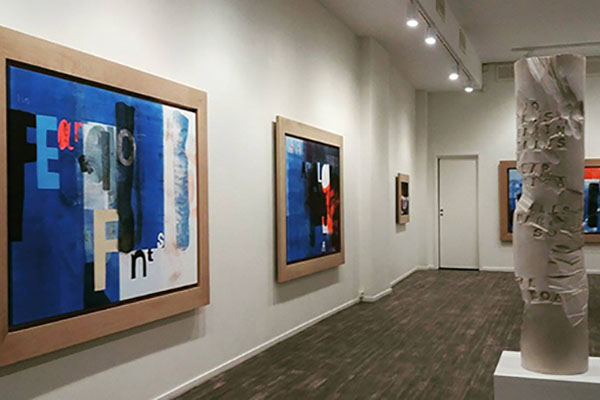 ‘Marginalia’ is defined as notes in the margin of a document or a book – made by the author himself or others. Often these handwritten comments or sketches illustrate or contrast the text. The term ‘Marginalia’ has a long and honorable tradition dating back to ancient writings, and such notes have in some cases radically changed our understanding of historical documents.

This exhibition consists of a series of colorful and poetic works, and contains a unique artistic collaboration between Magne Furuholmen and Lars Saabye Christensen at the intersection of art and literature. The partnership consists of monotypes and graphics given a shape resembling spread or pages from an unreleased ‘artist-book’, where Saabye Christensen has contributed what he calls the ‘homeless sentences’ – handwritten adages and poetic slogans Furuholmen has collated facing elements and other text, and processed this to a graphic idiom in which both parties appear as equals.

The exhibition opening took place on February 4, and was well attended. NRK has posted a short video report and interview about the exhibition here.

Magne has written and produced soundtracks for two movies based on books by Lars Saabye Christensen: Beatles and Ti Kniver I Hjertet.

Download a PDF from the gallery including photos of the monotypes here.

A photo posted by Galleri Norske Grafikere (@norskegrafikere) on Feb 1, 2016 at 8:34am PST

A photo posted by Galleri Norske Grafikere (@norskegrafikere) on Feb 4, 2016 at 9:41am PST