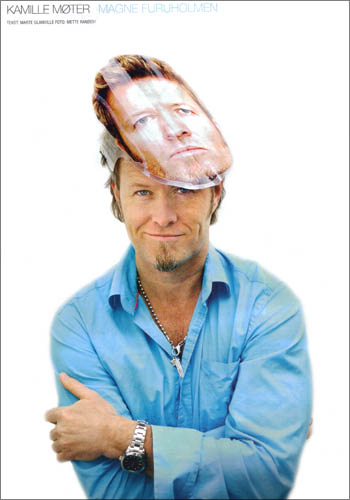 In August 2010, in connection with promotion around a-ha’s Norwegian stadium tour, Kamille magazine published a lengthy interview with Magne, including photos taken at his home and atelier outside Oslo.

There is a translation of the interview on the West of the Moon forum, which is included below with permission. Fan site a-ha Live also published a short post about this interview. 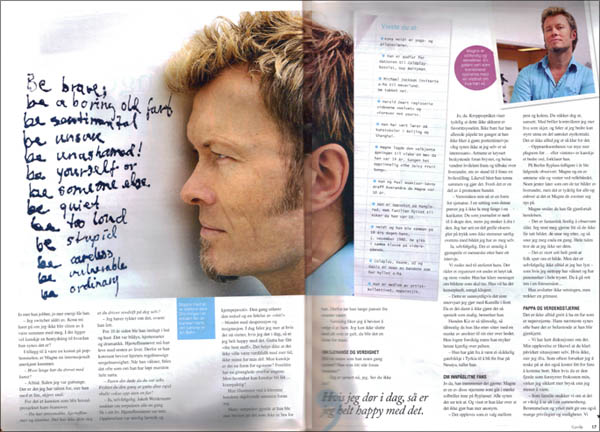 The last ever single from a-ha, “Butterfly Butterfly” is on the car radio as we arrive at Magne Furuholmen’s house. The occasion is that a-ha is getting ready to end a chapter in Norwegian pop history. The trio is quitting now while things are still good, after a quarter of a century and 100 million records sold.

Real estate agents would have used the words “rare pearl” or “nice set-up” about Magne’s property on an island outside of Oslo. There’s a tennis court, private boat dock, and room to breathe and find peace. The style is a combination of romantic and modern. The view offers ocean and sky. Inside the house, there’s good taste and a good economy. We come through the amazing security gate and go into the driveway, to knock on the front door. And there he is: Magne. Happy, tan and cool. He is wearing a wrinkled turquoise “MOODS” shirt, dark jeans and light colored shoes. On his chest, there hangs a silver necklace with a charm. He is tall and thin, with golden hair and speckles of gray with a matching beard. We thought he was great back in 1985, and we feel the same 25 years later.

As a popstar, you never run out of pretty girl fans with stars in their eyes.

And add on the depressing divorce rates for all of us these days. It feels good to go deep into the soul and discover that Magne is still married to the girl he dated when he was 18, Heidi Rydjord (47). They have 2 kids–Thomas Vincent (20) and Philip Clements (16).

“Yeah, we’ve been together for 30 years. The divorce rate in my field of work is around 99% so this is a respectable period of time, even if you’re not a popstar, right?” Magne jokes as we sit outside in one of his many summer table/chairs groups.

Heidi rummages in the kitchen as he pours out compliments about her. He knows he’s not the easiest to live with. He knows his job isn’t normal and he always has a lot of projects going on. At the same time. All the time.

“I’m very privileged to have already gotten this secure anchor before I became a popstar. I have been given a great amount of flexibility and at the same time I have a safe place to harbor. The peace that surrounds Heidi gives me a place to rest. It releases a lot of creative energy. I never have to worry that the kids are OK when I’m out or gone because I know that everything is taken care of. I have never wondered if I’m not at home enough. But I am sure that the kids aren’t lacking anything because I am the one I am.”

ABOUT LIFE AND DEATH

Magne is not the type to rest with his laurel leaf crown down over his head and sunbathe in yesterday’s glory. One can only guess about his work capacity. The more he works, the more energy he gets. “I never switch off. My wife wonders if I ever get tired of being with myself. Maybe this refers to how she thinks it is?” In addition to being a comet in the pop universe, Magne is an internationally recognized and renowned artist.

How long have you been in art?

“Always, since I was a little boy. That’s where I have talent.” He smiles a crooked smile.

Art will be his major project from now on.

You have stress problems, heart problems and tinnitus. It hasn’t hit you that you might be pushing yourself or overdoing it?

“I’m hearing rumors about it”. He answers easily.

10 years ago he was admitted to the hospital. Blue flashing lights, re-start the heart, and lots of drama. He has to live with his heart problems the rest of his life. Therefore he is always aware of his heart’s regular irregularities. When he wakes up, he often feels he has run a marathon all night.

Your father died when you were 6. Were you ever afraid that your boys would grow up without a father?

“Of course. Jakob Weidemann talks about the ‘torpedo’ that everyone experiences once in their lives. Heart problems were mine. The experience was extremely interesting and positive. The fear feeling mixed with desperation and resignation came out. Today I feel that if it ends now, if I die today, then I’m totally happy with it. My boys have gotten ‘the best stuff’. That doesn’t mean that it would have been more valuable with more time, especially for me. Maybe it’s a kind of selfishness? Parents have this joy of giving to their kids. But maybe the grip can be a little…cramping?” (He demonstrates by clasping his hands together and shaking) His ‘torpedo’ made him more aware about things that aren’t good for him. So he takes long breaks from unhealthy habits.

“At the same time, I like to consciously choose the ‘what the heck’. I can’t stop everything that’s wrong. Then it becomes a mania.”

ABOUT SHYNESS AND WORTHINESS

Doesn’t one like him ever get shy? One who stands in front of tens of thousands? “I’m shy right now. Can’t you see?”

Yes of course. His body language clearly shows that this isn’t his favorite thing to do. He has already pointed out 3 times that he doesn’t like portrait interviews… “I don’t think of myself as so interesting.”

His arms are crossed protectively in front of his chest and his legs shift restlessly back and forth over each other, not able to find a resting position. But he still does this interview anyway. Because it’s a part of promoting the band.

“In a setting like this, I try not to let myself be caught into a caricature. You as a journalist have to create that, but I wish to pull at it. I’ve seen many examples of things printed that don’t agree with the picture I have of myself.”

Yes of course. It’s impossible to reflect a person after only one interview.

We walk down to his private studio. There’s an organized mess under a high roof and large windows. “This is probably the last interview I’ll ever do with Kamille magazine. It’s stupid not to make it as special as possible.” His dog (Kiz) is so patient that in fact soon after, she is sitting and posing with a mask of a photo of Magne’s face over her head. (Magne says that owners look like their dogs)

Kiz carefully wags her tail as Magne lovingly pets and strokes her fur.

“She’s gone from a real street dog in Turkey, to being a fine island lady here.”

Yes, Magne admits that he is one of those stars who wears dark sunglasses at airports. Everyone thinks it looks stupid. And of course he realizes it doesn’t make him more anonymous. “It’s like a choice between the plague or cholera. You’ll stand out regardless. But with glasses, I control more what happens and I feel I can better steer away from unwanted eye contact. I’m not always ready for it. The attention was a lot more annoying…or intense is maybe a better word…before.”

Earlier this year at the Berlin airport, Magne and one of his sons were standing and waiting. Some girls came and pretended to take pictures of each other, but it was obvious to everyone that Magne was who they were zooming in on. Magne smiles as he re-tells this story. “It’s fun to see this. I like to turn a little so they can’t take a picture, then they turn a little, and so I turn a little again. The whole time they don’t think I see them.”

“For the most part, it’s totally OK that people ask me to take a picture with them. But I don’t always want to, like when I’ve just woken up and have pillow marks all over my face. Then to go straight into a photo session….”

Magne doesn’t complete this sentence, but makes a grimace.

ABOUT PAPPA AND BEING A WORLD STAR

It’s not always OK to have a Dad who is a superstar. His closest family and friends think it’s positive he has become famous. “We’ve had discussions about it. My experience is that you influence situations yourself. I try to think that it costs a little for fans, too..but if you are the 4th one to disturb my breakfast, I will probably be more harsh than I mean to be.”

“As a family, we talk about that it’s important to see everything in a connection. Fame and my career gives us many privileges and possibilities. For example, all of us are traveling to Japan.”

Think how strange it must be to stand and applaud your own father….whether for a concert or an art exhibit. How do you avoid to be in the shadow of a world famous father?

“You can’t. The kids live in my shadow. I’ve thought a lot about this–how it is to grow up with it. It will be difficult for them to avoid my footprints, especially since I have walked all over the place so thoroughly. My hope is that it isn’t paralyzing, but inspiring. They have complete freedom to follow and stake out their own course and they will put out their own footprints. I will support them no matter what they choose to do.”

You’re not tempted to continue on even though the 3 of you have it so nice together?
You’re playing for a sold out audience.

“Who says it’s nice?” A small smile appears on Magne’s face.
He emphasizes that he is thankful for the journey that he, Paul and Morten have had together.
It’s no secret that the journey has been rough and bumpy sometimes.

“I like to break patterns. I’m not the type to stay hanging onto things. I would rather trample over the sandcastles *I* built and be happy and proud that I built them, rather than to be angry at the ocean tide that takes them.”

“With age, some people become old and bitter, others become playful and wise. I would like to be old and wise….IF I get the opportunity to become old.”