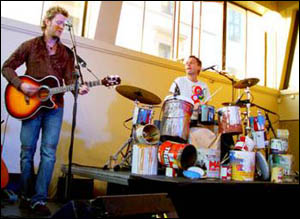 Magne was chosen to open the Carnegie Art Awards event with a live performance, during which he premiered three new songs from his forthcoming solo album. Morten was present at the event and said that Magne’s songs were ‘great’. Magne was accompanied by Martin Terefe on guitar and Frode Lamøy on drums made out of paint cans.

There was an article about the performance on a-ha.com, and photos on magnef.org, and lastly one discussion on the German a-ha Forum,
but otherwise there is little information online about this performance, and no set list that I’m aware of.