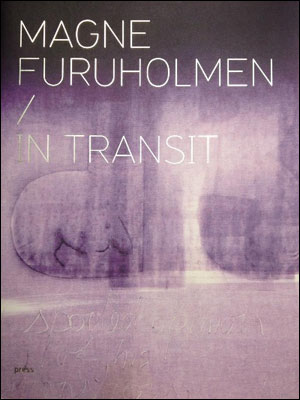 The book was released on February 6, by Forlaget Press. The original announcement about the book was published by Dagbladet in December 2010.

Pop music fans know him as songwriter and keyboardist of the chart-topping 1980s band a-ha, but Magne Furuholmen (born 1962) has been working as a visual artist for decades, in painting, ceramics, printmaking, film and installation. All of his works suggest roughly drawn visual poems in dismantled letter shapes. This book sums up his most important works in a massive coffee table book.

See a 24-page preview of the book here.

To buy this book, send an email to marked@fpress.no, with name, address, telephone number and quantity of books desired.

Offer stands until 6th of February. Read the full announcement in this newsletter from magnef.org.

There was a book launch event at The Thief hotel in Oslo on February 6, 2013. At the event, Magne spoke with Ute Meta Bauer and Håkon Harket about his art career and the book. Forlaget Press published a photo album on Facebook from the event.

On February 13, there was another presentation and a book signing at Tronsmo Bokhandel in Oslo from 5:00pm. Magne spoke with Professor of Art History Øyvind Storm Bjerke about the book and his art career.

There is a special edition with print available from Fineart.no.

From Press (translation by Google):

The book provides a comprehensive presentation of all his art projects that collectively have deployed a wide range of techniques and genres. A handful of internationally distinguished critics contribute with texts about specific plants, while Magne Furuholmen’s own views accompany a rich visual material which we are brought close to the creative process.

Pop music fans know him as the guitarist and keyboardist of the chart-topping 1980s band a-ha, but Magne Furuholmen (born 1962) has been working as a visual artist for decades, spanning media such as painting, ceramics, printmaking, film and installation. All of his works incorporate language, making roughly drawn visual poems from dismantled words and letter shapes. In Transit is the first extensive publication to survey his career and works.

Photographs by Lars Gundersen, who has been following the Norwegian artist since 1991, take us into Furuholmen’s studio and elaborates Furuholmen’s work habits. The book features contributions from Furuholmen’s former and current collaborators, including a conversation with the Norwegian poet Henning Kramer Dahl and an interview by Ute Meta Bauer. Essays by leading curators and critics such as Selene Wendt, Richard Dyer, Mark Gisbourne and Octavio Zaya provide further insight into the artist’s practice.