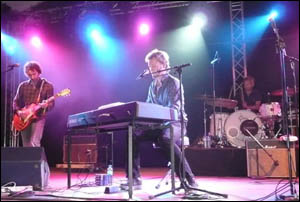 Magne performed a concert at the Tent stage at Hovefestivalen, which to date was his last solo concert. He also participated in the festival in the form of an audio installation called ‘Transmutation’.

Promo clip for the festival:

Interview with Magne before the festival:

Translation of the above video by Jakob on West of the Moon:

“I haven’t played at that many [festivals]…we have played some festivals with a-ha, but that’s usually been really big ones, like “Rock am Ring” as headliner, gigantic festivals like that.

Now we’ll be playing in the tent, and we’re hoping for rain, so people will come and see us instead of going to a different stage where another band is playing. It’s a different setting.

But I make music which isn’t suitable for being forced down people’s throats, in the way that it immediately becomes when you have a big, successful and very visible band. So it’s very nice to have projects where…the thought of someone actually discovering my music a year after it’s been released is a great feeling.

But I have no wish to impress anyone…cause that’s what a-ha has become, you know, something that always has to impress with large events, with hit singles – it’s become a habit, in a way.
And then it’s liberating to get away from the idea that if you don’t impress, you haven’t done your job. I’m not trying to impress, I’m just trying to perhaps touch your feelings.”