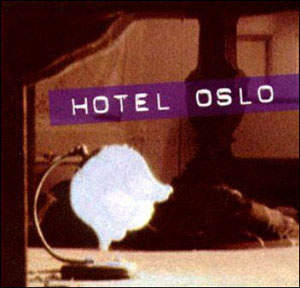 “Hotel Oslo” by Kjetil Bjerkestrand and Magne Furuholmen is the soundtrack album to the TV-movie shown in Scandinavia during January and February 1997. Click the track name to hear a 30 second song sample.

If the TV series has been described as unusually good, the music that accompanies the production is even better! Kjetil Bjerkestrand and Magne Furuholmen have created superb film music before, e.g. ‘Cross My Heart’ (1994), but they surpass completely everything they have done before here – whether it be together or with others – whatever! They have engaged Freddie Wadling (Bottle Quartet) and Anneli Drecker (Bel Canto) – two singular and superb singers. Especially the first-mentioned has left his stamp on this album! ‘Hotel Oslo’ has its own life also outside of the TV arena, and functions excellently as an independent product in this respect. The music is alluring and convincing through and through, with a good sound and lively arrangements. The duet with Anneli and Freddie on track 4 (that is designated as “Room 4,” out of a total of 14): ‘A Room for Thought,’ contains everything (and more) a modern hit should have, and can single-handedly sell both the TV series and the album to the world market. ‘Hotel Oslo’ is an album that reeks of both inner and outer qualities, and it can fast become a big favorite with zealous record-buyers. The Norwegian musical year of 1997 has in any case gotten an explosive start, thanks to Bjerkestrand and Furuholmen!

A Room For Thought performed live at the Edvard Prisen awards: