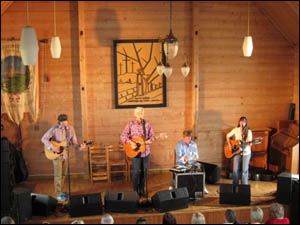 Magne performed with British musician Robyn Hitchcock during the Go With The Flø Festival. There was some additional information about the performance in this interview on a-ha.com by Anastasia Koshelko/EGO1st:

Your performance was acoustic, but some of the songs were accompanied by Mr. Furuholmen, who played tenori-on. Why did you decide to use this modern electronic instrument in an acoustic concert?

We just wanted to see what would happen if he came up and played with us. If you noticed that, there was no drummer on the stage. And Frode and I, we are very old-fashioned, and we have trouble keeping in time without a drummer. So we decided to try tenori-on. But Magne used it not just as a kind of a drum machine, but rather as a kind of keyboard to create some special effects. I really liked this idea. The main thing is keeping in time and the sound.