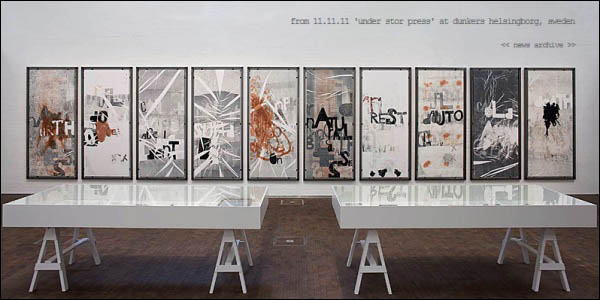 Magne’s previously unseen ‘Futura Plus’ works were represented in a group exhibition called ‘Under stor press’ (‘under pressure’), which included over 800 works from 80 artists. The full catalogue from the exhibition is available online here.

There was a special preview of the exhibition on November 9 for members of the press. Magne was present, along with Kjell Nupen, Ørnulf Opdahl and Queen Sonja of Norway. You can see pictures of some of the works in Dagbladet.

NRK showed a documentary about Magne on November 7 called ‘Dance for Daddy’, which included – among other things – a lot of footage of Magne’s creative process around ‘Futura Plus’. Watch the program on YouTube: Part 1 | | Part 2

Please see this post for more information about the original planned exhibition at Stolper + Friends on September 1, which was later cancelled.

Article from Dunkers kulturhus, which was online here, but is no longer available:

Under Pressure is an exhibition featuring work by some 80 internationally reputed artists. This is the first time that a major exhibition of, primarily, new art prints by so many established artists has been attempted in Sweden. All of the artists have collaborated with Atelje Larsen.

“As long as there is metal there is hope” (Thormod Larsen – founder of the studio).

“This exhibition will act as an eye-opener with regard to contemporary art prints” (Ole Larsen).

The studio was started by artist Thormod Larsen in Helsingborg some 40 years ago. Thormod’s son Ole became involved in the business at an early age and soon took over the reins. Over the years the studio has developed into one of the world’s leading print makers. This is the result of the high quality of the prints produced here, but also of the highly personal collaboration between the staff and visiting artists which frequently involves a good deal of experimentation. Further to this, the studio is equipped with an exceptionally large printing press with a width of 1,5 metres and a length of 3 metres. This means that the studio can produce prints of a size that few, if any, craft print-makers can achieve.

Central to the theme of the exhibition is artistic quality. Categorization according to chronology or technique has been banned. Under Pressure seeks to illustrate the rich possibilities that are available in the art print – that the art print is a medium of expression in its own right and not just a way of duplicating images. Ole Larsen has played a major role in helping to organize the exhibition. Many of the rooms have been allotted their own colours using nuances that do justice to the whiteness of the paper. The works range from small to large and are shown variously in displays or on the walls. We can assure you of an exhibition of real beauty.

Under Pressure also aims to give visitors insights into the printing techniques that are used. This will be very apparent at the exhibition where a workshop has been fitted out with a printing press, with expert staff on hand to explain the different techniques and demonstrate how, for example, a copper-plate engraving is made. Visitors will also be able to try their hand at producing prints.

The exhibition will also include a cinema where the history of Atelje Larsen will be shown on film as well as art films by some of the participating artists.