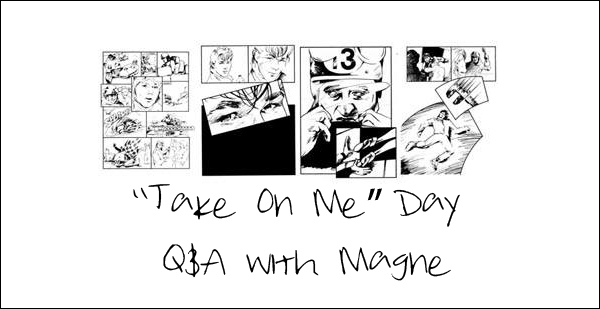 On September 13, a-ha.com announced a day-long celebration of the legacy of ‘Take On Me’ which would take place on September 16, including a live Q&A with Magne on the a-ha Facebook page. The Q&A started at 7:00 pm CEST on Facebook, where a-ha.com opened up a thread for fan comments and questions.

Magne was kind enough to spend nearly two hours on Facebook on Monday evening, answering questions from fans about a-ha, “Take On Me”, his art and music projects, and much more. In all, he answered more than 80 questions, and we have a summary available for download.

Reminder! At 7:00pm CEST (five minutes from now, wherever you are in the world) Magne will be doing a Q&A on Facebook http://t.co/u7Fc84lVqn

Celebrating the Legacy of "Take On Me" – join us this Monday for facts, cover versions, and a special live Q&A with Magne on Facebook!!