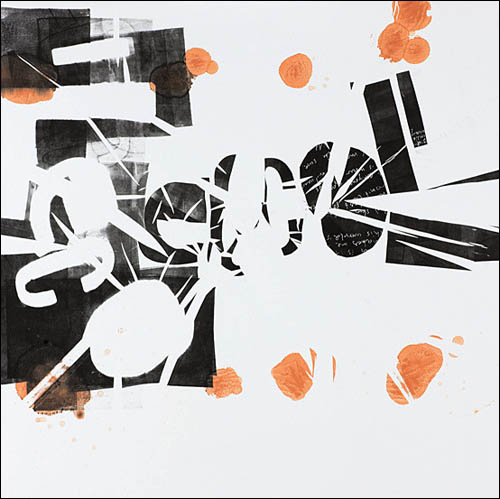 The works consist of four large monotypes on hospital sheets, originally intended for Futura Plus, and a selection of twelve smaller monotypes on sheets and paper. According to a message from the gallery on Twitter, “expect stunning new works on canvas and paper”.

Apparently there was an article in the VG paper edition on November 25 about the exhibition, a photo of the article is on Stolper + Friends Facebook page.

More information about the exhibition was added to the Stolper + Friends web site around November 25:

‘Echo’, showing in place of ‘Futura Plus’, the previously cancelled show, comprises oil on hospital sheet and oil on paper works. Large in scale the works range from 1.1m x 1.1m to 85cm x 2m, the latter dictated by the dimensions of the hospital sheet. The works were made during the same period, and draw on the same surrounding life and death themes, as ‘Futura Plus’.

Update: Thanks to Jakob at a-ha-live.com, here is an update about the exhibition based on that VG article and response from art critics:

It consists of four large monotypes on hospital sheets, originally intended for Futura Plus, and a selection of twelve smaller monotypes on sheets and paper.

Although commercially successful, Magne’s art hasn’t always been embraced by art critics. But Echo gets a glowing review by VG’s Lars Elton, who gives the exhibition a 5 out of 6 rating and describes Magne as an innovator in his field:

“This is an exhibition that takes the field of art a step further. Not only does Magne Furuholmen really make himself respected, he also moves graphic print techniques forward”, Elton writes.

“(…)Visual games with letters has been a dominating motif for Furuholmen since the 1990s. And you would think this theme had been worn out by now. But with these new works he reaches a new level, partly because the images are visually strong, but first and foremost because the letters and the words they form have been put into a meaningful context.

The works provide a level of seriousness and reflection that evoke emotions. When you add the groundbreaking formats and the innovative technique, this becomes an exhibition that moves the field of art a step forward”, Elton writes in his review.

Echo is on display at Stolper + Friends until January 15th.