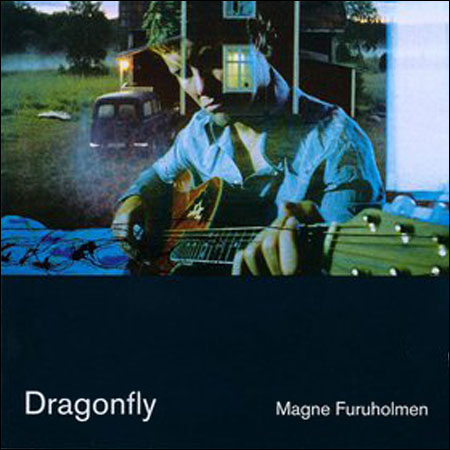 Magne released the EP-single ‘Dragonfly’ (Oyenstikker) in Norway on September 17, 2001; the EP also features soundtrack music for the film of the same title. The film premiered during the Quart festival in Norway on July 6, 2001, and Magne performed ‘Dragonfly’ at the annual “Hit Awards” in Norway that September. Read more about this appearance here.

Click the track name to hear a 30 second song sample.

Excerpts from a-ha.com about media coverage of the movie and soundtrack:

The single, the bittersweet ‘Dragonfly’, is as brittle as it is sweet. Magne Furuholmen’s slightly helpless way of singing suits the low-key, acoustic sound of the song. The bass line, the melody construction and the presentation resemble both U2 and a-ha.”
“The rest of the album is a more typical movie score composed by Timbersound (Kjetil Bjerkestrand and Furuholmen): sounds and musical sketches. The soundscape creates a distinct atmosphere, and it works well in the intended context. Dagbladet

“‘Dragonfly’ is not a record for restless rockers in need for heavy grooves, but is rather for those who have the time to sit down for 17 minutes and let the relaxing atmosphere of Furuholmen’s ‘Dragonfly’ recharge the batteries. This is a beautiful and melancholic release from Furuholmen, where the simple piano chords in the company of the tender brass instruments give a feeling of tranquility and inspiration. ‘Dragonfly’ reminds to an innocent ‘Radiohead’. Magne Furuholmen throws himself into a personal experiment on the title track – the one and only song on the album that includes vocals. His sensitive, uneven voice moves through an ocean of slide guitar, echo and fuzz and makes the song one of the best on the album.”
“(…) Together with a bottle of red wine and a blazing fire, it could easily become a favourite in the darkness of the autumn.” Bergenpuls