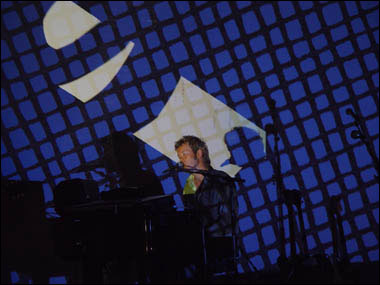 Magne performed a sold out show at Bergen’s Den National Scene, and the show ended with a standing ovation from the audience. About the show, Magne told a-ha.com:

This time we chose a setlist playing the slowest and softest song first, and just kept going up in tempo and intensity all the time. From where I was standing, it seemed to me that it created the intended reaction. At first the audience was a little intimidated and uncomfortable with the directness and fragility of it, gradually loosening up, until at the end, they actually all got up for a standing ovation. Next time maybe we should start the show with the rock numbers and work our way down!

I know most of the audience will not see more than the one show, but it is actually more an attitude-thing for our own sake. This concert was our fourth ever (!) after nearly a month break, and I knew that if we started to bottle out by repeating ourselves now, we would lose the sense of danger and possibility, and gradually start to feel like performing monkeys. I am proud of my team and how they handle spontaneity and change with such confidence, and I don’t think people mind knowing they are part of an experimental situation. Anyway, I don’t feel in any way obliged to play to expectations.