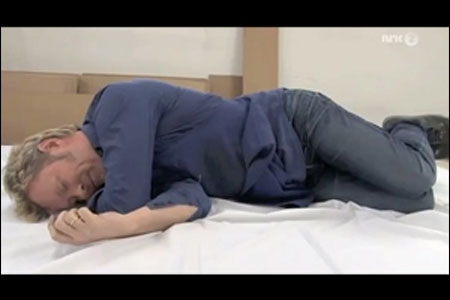 The NRK program ‘Nasjonal Galleriet’ aired a 30-minute documentary about Magne, focusing on his art career and how the loss of his father at a young age influenced his creativity. Here is the program guide description (translation by Jakob):

Documentary about Magne Furuholmen. An old and dented trumpet that has been through a dramatic airplane crash, used and blood-stained hospital sheets, and a story of skepticism and resistance. Get to know the artist Magne Furuholmen in tonight’s Nasjonalgalleriet.

Journalist Charlotte Thiis-Evensen went with Magne to Helsingborg, Sweden in the spring of 2011 while he was working with Ole Larsen on ‘Futura Plus’, and there is a lot of footage of the creative process around these works. There are also video clips from some of Magne’s exhibitions throughout his career, and interview segments which were filmed in his atelier in Asker.

Magne has said that this documentary is the ‘closest portrait he’s seen of himself’.

Not related to this documentary, however related to the topic, are several articles from 2008 which focus on the effect of the loss of a parent on an artist’s creativity: