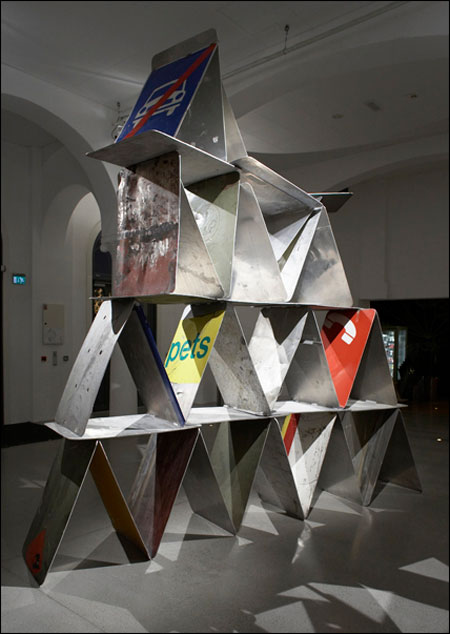 Magne was commissioned by Hydro to create a sculpture for the Nobel Peace Center, and the result was a reclaimed aluminum work, ‘Climax’. The sculpture was unveiled by Nobel Prize Award winners Al Gore and Rajendra Kumar Pachauri on December 11, 2007.

Before taking the commission from Hydro to create the sculpture, Magne spent some time considering the theme of this year’s Nobel Peace Prize award as well as the properties of aluminum. In an article on the Hydro website, Magne says,

“I think we are living at time when there is a delicate balance, and in a time of major change, regardless of whether it is we ourselves or the sun that is responsible for our environmental problems. I started working on the title before I knew what I was going to make. I tried to find words that describe the situation we’re in and I came up with the concept of “Climax”. It means ladder in Greek. Apart from its use as term in drama, and its erotic connotations, the word is also used rhetorically by Gore and ecologists to describe an ecosystem strained to the maximum.”

Having hit upon the concept of a house of cards, Magne gathered materials from a variety of sources, including defunct planes, retired tankers and traffic signs. Rather than smelting or recycling the materials prior to creating the sculpture, Magne used the plates immediately after cutting them out of their original context – left as they were found.

The 4m high ‘Climax’ will be on display in the Nobel Peace Center in Oslo through the spring, and Magne has said that the materials can then be recycled by other artists, to continue the process. 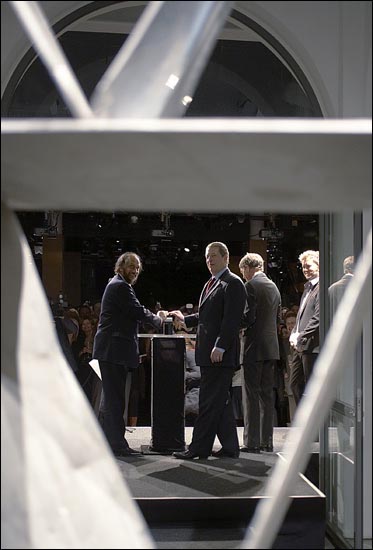 In a related project, Paul Stolper announced the launch of ‘CLIMAX CARDGAME’; a set of 15 aluminium cards, each engraved with text on one side and image on the other. There is a picture of the card game here, and a set can also be purchased at Fineart.no.

Article from THE THIEF: Play a different game