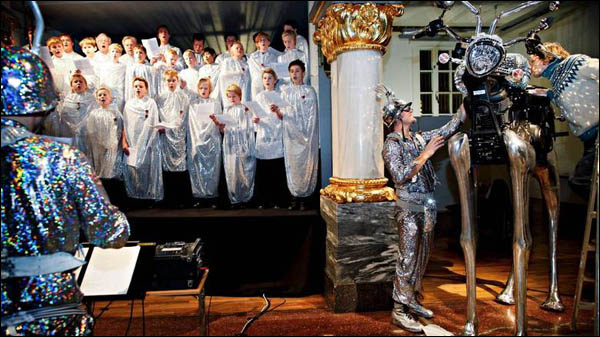 On December 11, the Oslo Boys’ Choir Sølvguttene performed a musical work composed as a result of the recorded movement in the gallery during the ‘Everybody is a composer’ installation during ‘I wish this was a song’ group exhibition at the Museum of Contemporary Art in Oslo. 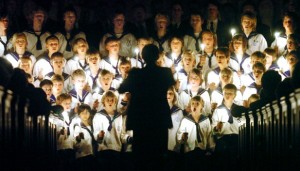 From the press release (via Google translate):

Work on the new piece ‘Everybody is a composer!’ Started the same day as the exhibition “I wish this was a Song. Music in contemporary art ” opened in September. The final choral work will be performed live on Tuesday 11 December at. 17.00 of Sølvguttene in spectacular silver outfits designed by Moods of Norway.

This year Sølvguttene expanded its traditional Christmas repertoire by singing a newly written cross the thick of Apparatjik at the Museum of Contemporary Art. Apparatjik is a band founded in 2008, consisting of Magne Furuholmen, Martin Terefe, Guy Berryman and Jonas Bjerre.

The media group is often referred to as a supergroup, a superlative that alludes to the fact that Furuholmen has a background from a-ha, Berryman is the bassist of Coldplay and Bjerre is the lead singer of Mew. For those Apparatjik functions as a free zone where the individual artist-I’m not that important. The band has repeatedly acted in a cube-shaped installation called The Apparatjik Light Space Modulator, which is inspired by László Moholy-Nagy’s moving, shadow throw Sculpture Light Space Modulator from 1930.

To “I wish this was a song. Music in contemporary art” Apparatjik has, along with Audiokolor, created a site specific work. The piece titled Everybody is a composer! Based on museum visits’ movements patterns. The Data Inspectorate blessing transmitted signals from the fixed surveillance cameras to a program abstract and reinterpreted information to the graphical codes.

Apparatjik use these as the basis for its new composition. The composition is thus not a direct interactive works. It is rather a question of a controlled musical translation of visits Ernes relatively random movements in the room, which gives the Orwellian reality a beautiful finish.

The Apparatjik and Sølvguttene director Fredrik Otterstad will be present to answer the question after the world premiere.