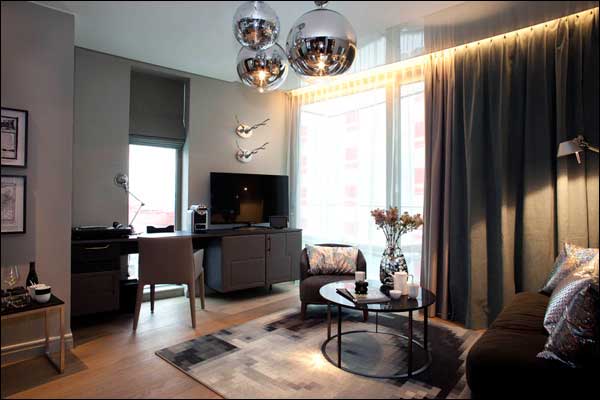 Apparatjik and interior designer Karina Holmen have furnished and decorated a guest suite at THE THIEF hotel based in the Apparatjik World. Read a press release about the suite here. In June, THE THIEF posted a picture of ‘the ultimate hangover kit in the Apparatjik Suite’ on Facebook.

According to THE THIEF web site, here is the description of the Apparatjik Suite:

Apparatjik, a collective of international artists and musicians, has furnished THE THIEF’s Apparatjik suite in partnership with interior designer Karina Holmen. Welcome to a little corner of ‘Apparatjik world’! with disco-ball textiles, pixel-patterned blankets, a roof-mounted projector showing Apparatjik’s video art and disco balls in the bathroom and lounge. The suite is also decorated with eights prints signed by the supergroup.

The suite has also been supplied with books and vinyl by Apparatjik as well as a comprehensive selection of albums by the group’s own favourite artists.

According to an article in The Luxury Travel Bible, Choice Hotels owner Petter A. Stordalen describes the Apparatjik Suite:

My favorite room is the Apparatjik suite. It isn’t the biggest or poshest, but it just might be the quirkiest suite out of all the hundreds of suites in all my hotels […] The suite is filled with disco-textiles and pixelated carpets. There are so many weird things going on…I don’t think the regular guests will even discover half of them. Let’s start with the bathroom, it comes complete with a disco ball in the roof and a luxury meteor-shower for state-of-the-art self-cleansing. Then you have the multi-user Apparatjik channelings on the TV, Apparatjik prints on walls and – ta-da! – the choice of a virtual bedpartner! From Apparatjik of course, and projected onto the bed – it’s definitely a world’s first.

Posted by The Thief on Facebook, a video about the suite called ‘Apparatjik World’:

Apparatjik World from THE THIEF on Vimeo.

Another video about the suite:

APPARATJIK WORLD – “GO TO BED WITH AN APPARATJIK AT THE THIEF” from THE THIEF on Vimeo.

Three videos from Carlos Macia, a fan who won the ‘Dance like an Apparatjik’ contest, and got to stay in the Apparatjik Suite as his prize: