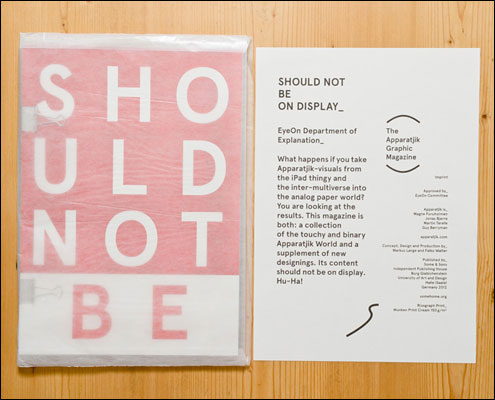 Markus Lange and Falko Walter have produced a RISO printed magazine for Apparatjik, which is the focus of this exhibition. There is information about the magazine and exhibition on Slanted.de and on Facebook.

Apparatjik Bulletin: SHOULD NOT BE ON DISPLAY – The Apparatjik graphic magazine exhibition

An excerpt from the magazine explains:

“What happens if you take Apparatjik-visuals from
the iPad thingy and the inter-multiverse into
the analog paper world? This magazine is both: a collection
of the touchy and binary Apparatjik World and a
supplement of new designings. Its content
should not be on display.
Hu-Ha!”

Here is a promo video about the exhibition:

Also there is a great behind the scenes video by somehome.org with footage of Apparatjik in the studio in London and at Roskilde earlier this year:

Two final videos: Apparatjik is happy to… | | Recap – Opening The Apparatjik Graphic Magazine Exhibition “SHOULD NOT BE ON DISPLAY”

These videos were also produced by Markus Lange and Falko Walter.

In spring 2014, pictures including prints from SHOULD NOT BE ON DISPLAY showed up on Instagram. The pictures were taken at the Universal Music Publishing Group’s studio in New York City.