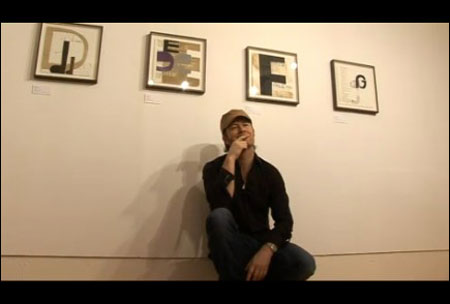 This Magne F portfolio ‘Alpha-Beta’ is published by Paul Stolper and consists of 30 individual prints – one for every letter in the alphabet, including the 3 specifically Norwegian characters æ, ø, å, and an exclamation mark.

More information from the exhibition announcement:

This unique project is based on the vocals recorded for a-ha’s highly acclaimed new album “Foot of the Mountain”. Using the existing sound files as raw material, the artist deconstructs, stretches and reconfigures, taking them out of their melodic and linguistic context, creating a completely new piece of music in its place. In this experiment the iconic voice of Morten Harket is pushed into territory far removed from how it was originally recorded. Much like the way Magne F ‘s letters are reconstituted by the viewer, these vocals, already such a signature in people’s minds, are re-sampled, contorted, and re-presented by the artist: “I see the ‘Word Symphony’ as a recycling exercise – taking apart something meticulously constructed and turning it into something else.”

Polite issued a set of cards with reproductions of the full ‘Alpha Beta’ alphabet, which was available here, but is apparently sold out online. However you might try contacting Stolper + Friends to inquire if there are any sets left in the gallery in Oslo.

Magne held an artist talk at Edinburgh Printmakers on February 17, 2010. A fan named Georgia wrote a blog about the talk for The Bandstand fan site.

Eighties pop star to printmaker does not seem to be a particularly logical career progression, but a-ha keyboardist Magne Furuholmen’s latest exhibition would suggest otherwise.

The works, comprising drypoint and monotype prints of each letter of the alphabet plus Norwegian letters and a rather lonely looking exclamation mark, have an instantly appealing lyrical quality.

The aformentioned exclamation mark opens the exhibition, simple and striking in monochrome. The rest of the exhibition is spread over two rooms, which feels slightly disjointed – it is odd for something as instantly familiar as the alphabet to suddenly stop and then continue around a corner. Seemingly caused by space constraints rather than any particular artistic meaning, the split is certainly not a major problem, but does perhaps interrupt the fluency of the exhibition somewhat. However, Magne F’s choice of colours certainly helps to keep it cohesive. Black and white are predominant alongside purple, grey and brown: a quietly beautiful palette.

Many of the prints feature lines of poetry, or the artist’s musings. Some are fairly obviously linked with the letters (‘N’ and ‘note to self’), but most are more oblique: ‘R’ is printed alongside the words ‘self serving pretention’ and ‘M’ tells us that ‘some lines form a perfect circle/some take shapes you can’t predict’. Combined with the scribbled handwriting – often partly obscured by layered cut-outs – this gives the exhibition a highly personal feel.

I couldn’t decide whether I was trying to decipher a code, where the once so familiar letters take on new meaning, or simply leafing through someone’s rather angsty diary.

Considering the inclusion of the three Norwegian letters æ, å and ø at the end of the alphabet series, it would have been interesting to see more of a relationship between English – as used in the rest of the prints – and Norwegian. These letters are clearly sufficiently significant to the artist to warrant a place in the exhibition, yet until the end of the second room we would have no idea of a Norwegian influence.

Another potential level to the exhibition which is left unopened is the music Magne F has composed, titled ‘Word Symphony’. It was composed alongside the prints, but does not feature in the exhibition: copies are instead being given away with the first 500 prints sold.

The exhibition is undoubtedly aesthetically pleasing and provides a quick hit of visual poetry. It is a shame that its potentially multi-faceted nature is not explored, but this does not detract from the instant beauty of the decidedly individual works.